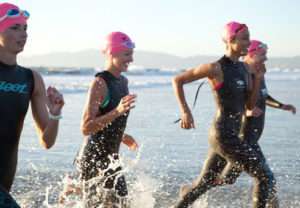 In this case the triathlete’s neighbor shared the participants concern about completing the swim portion of the tri. She even encouraged him to wear a life vest or arm floaties to do so. The participant, 57 year old Don Green, was pulled from the water while rescuers performed CPR. Sadly he died. I have not investigated any further than this news report, however I wanted to take a few minutes to address YOUR concerns about deaths in the swim leg of a triathlon.

First of all, it’s real. Triathlon deaths occur overwhelmingly during the swim portion of the event. There are a number of “common sense” reasons that this happens, and some information has been collected regarding autopsy results and known previous medical conditions of participants who have died. In the popular press, you may see written that so and so had a known “heart condition”, when in reality the known heart condition is not one that typically causes a “heart attack” as most people understand the term.

Let’s clarify some of terms. A “heart attack” is a laypersons phrase that typically describes anything that causes the heart to stop pumping blood effectively. The most common type of “heart attack” is a myocardial infarction which occurs when a small blood vessel blockage causes the blood flow to a portion of the heart to stop, and an area of heart muscle dies or is temporarily injured. These types of heart attacks almost always cause pain, and usually are not fatal.

When someone with underlying heart disease such as a narrowed blood vessel or previously injured heart muscle exercises, it’s generally a good thing that helps the whole body function in a healthier way. But each individual has a threshold of exercise or activity (sometimes even just walking up the stairs) that creates a demand for oxygen for the heart muscle. If this demand exceeds the ability for the blood to reach the muscle, then it causes pain and “ischemia” or decreased blood flow to a working muscle. This can cause further heart damage in some cases, but is usually reversible almost immediately if the activity is stopped and demand for oxygen goes down. Nitroglycerin, a common heart medication, helps this condition by dilating the blood vessels in the heart allowing more oxygen to flow to the muscle and reducing the pain.

There is however, an entirely different category of “heart attack”. I believe that most triathlete deaths occurring due to a “heart condition” or “heart attack” are actually in this category when they occur and I’ll explain why.

An arrhythmia is an abnormal heart beat, usually a sustained electrical conduction in the heart that results in a rapid heart rate, decreased time for the heart to fill with blood and as a result, a reduced delivery of blood to exercising muscles…and the brain.

Symptoms of an arrhythmia can include rapid heart rate, chest pain and losing consciousness. Most people have occasional abnormal heart beats…and most of us do not feel or notice them. However those that do, frequently experience some concern or anxiety as they can feel the heart pounding or racing. This anxiety can release more stress hormones, which are known to irritate the heart, and cause them to occur more often.

Caffeine is also a culprit and most people who experience sustained arrhythmias are encouraged to avoid caffeine.

Who has NOT experienced stress, anxiety or some panic at some point during a triathlon swim? Even if you are an experienced swimmer with many race starts, the swim start even for pros (or especially for pros) can be an all out “combat” experience at times.

So regardless of your level of swim experience, speed, or place in the field…pro or age grouper, this is the time of the highest adrenaline response. Pre race nerves or anxiety, a cold start, cold water, waves, splashing, no spaces for yourself…

All of that internal adrenaline can contribute to setting off an arrhythmia. While it’s nearly impossible to prove, my suspicion as a physician based on seeing many patients with this condition, is that this may be one of the biggest factors contributing to swim deaths.

There is no place to quickly and easily stop, no way to quickly and reliably signal for help. Even with ample lifesaving kayakers, boarders or noodlers in the water, identifying a swimmer in need is difficult. Compounding that, the swimmer in dire straights may be unable to signal for help or unaware that help is exigently needed until they lose consciousness.

There are surely other contributing factors for swim deaths. A kick to the head causing a loss of consciousness or disorientation, inhaling water causing panic and inability to settle and cough until composure is regained. Fatigue due to struggle. All are factors I’m sure.

However I am willing to bet that the number one factor is the STRESS and ANXIETY and the stress hormones released during the swim start.

Life is not a disposable option when it comes to pride in being a triathlete.

Triathletes and triathlon coaches need to be cognizant of spending the time, money and energy required to create competence and confidence in an open water swim start, so that the likelihood of some avoidable causes of death decreases dramatically.

Terry Laughlin of Total Immersion talks about creating a “cocoon of calm” during the swim.   It’s one thing to achieve this cocoon of calm in the pool, in a lane by yourself, but a completely different thing to develop the same skills during a mass swim or even a time trial start.

If you are following along so far, please leave a comment below and let me know what struggles YOU have had in an open water swim start.  Let’s work together to make this a safer sport for everyone involved.   What’s keeping you from being the best triathlon swimmer you can be?