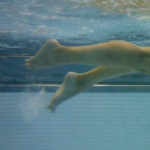 If you’re confused about the best type of kick to use when swimming and training for triathlons, you are not alone.
Everyday it seems I am helping swimmers understand what the kick is best used for and how to most efficiently work it into their stroke.
Here’s the quick version.
Swimming is a right half, left half activity, not a front half/back half one.  The kick connects the body diagonally through the core integrating the right and left sides of the body so that they can work in synergy.
The right leg aids in rotation to the left side streamline and vice versa.
A single kick accompanies a single stroke or a single spear forward. Think of the right leg kicking the left arm into streamline.  In this manner, one kick with one stroke, the swimmer is using a “two beat kick”, often abbreviated as “2BK”
So why is a “2BK” (Two beat kick) generally a better swim technique for triathletes?
Here is the advice I gave on the Total Immersion swim forum to people asking the same question…

Leg muscles are HUGH oxygen consumers. If we are striving for efficiency, consume less oxygen. Even an efficient kick is not an efficient way to create forward motion, so adding a 6 BK to an otherwise 2BK swim will instantly decrease the efficiency even if it increases the speed. It’s like adding a red sock to your white load…it’s gonna come out pink no matter what, even if it’s just one sock. Adding any extra leg movement might make you faster but it’s going to decrease efficiency.

if you are interested in RACING, you want to go the fastest you can for that distance which means that on race day, efficiency is a secondary measure…speed is first.

But in the long run you want to determine the most efficient way to travel the speed and distance you are targeting. For a 100m racer this is a completely different ballgame than an Olympic distance triathlete vs a 5k Open water recreational swimmer vs. a 5k OW AG competitor.

Finally, as someone above mentioned, kicking often compensates for balance problems. We try to teach the swimmer to solve these balance problems with lower energy cost actions like getting the recovery arm forward and not stuck behind, opening up the axilla/shifting the scapula forward, optimizing head position etc.

Not everyone can have optimal balance a) with a kick or b) with a new 2bk. However we see swimmers of all body types from long & lean to short & stocky including TRUE SINKERS (those wholes whole body density is greater than water…very rare) all able to establish balance with a 2BK.

If they then want to add a 4 or 6 beat kick to the mix and see what happens, that kick is suddenly going to become an efficient kick instead of a balance compensating kick.

Triathlon Swimming Techniques – When to Catch the Water

Triathlon Swimming Tips – How to Swim Straight in Open Water