Triathlon Swimming Techniques – When to Catch the Water 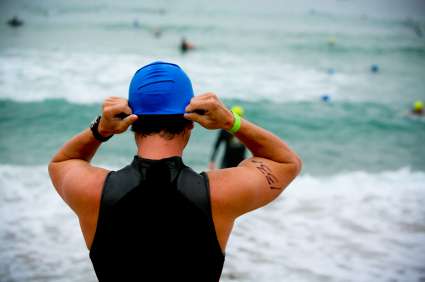 Some coaches will say that the “catch” is the first part of the swim stroke, that without a good catch, you’re odds of going nowhere fast increase dramatically. I’d like to propose that the opposite is true. That the catch can only happen as a result of your body position and rotation being properly set up.

By considering the catch as Phase 1 of the stroke, you are at risk of overreaching and overextending not only the elbow but also the shoulder joint. When a swimmer focuses only on reaching forward and trying to then bend the elbow to 90 degrees, the shoulder joint is typically fully locked out in abduction and external rotation.

From this position, bending the elbow to 90 degrees and pulling results in increased forces on the shoulder joint itself and requires a great deal of strength to hold this position relative to the water. Not to mention that most people will then try to force their arm through the water in this position, adding to the repetitive stress placed on the shoulder itself. Thinking of the catch as phase one of the stroke allows for little room to consider the catch in it’s natural context, which is part of the three dimentional act of swimming.

The Three Phases of the Basic Swim Stroke

I’d like to propose that the catch is the final portion of the swim stroke. That it happens only after several other important body positions have been established.

Phase one is placing the body on an edge, like the hull of a seaworthy boat which will have two stable positions on each side allowing it to lean into the waves without tipping over. The body is first placed on it’s “edge” around 40-70 degrees of rotation. Not 90 degrees, and not zero degrees.

Phase two (whcih really happens simultaneously with Phase 1) involves the lead arm piercing the water at an angle just lateral to the center axis of the body (11 oclock and 1 oclock respectively for the left and right sides). The downward angle of the arm should be adjusted to allow the swimmer to lean forward into the armpit and buoy the hips up towards the surface.

Phase 3 involves great patience as the body should ride this stable edge as long as possible so as to not interfere with any forward motion already created. Many coaches and systems call this the “glide”.Most slow swimmers are slow because of frequent placement of body parts in a way that increases frontal surface area. Once you have reached the “skating” position with minimal drag you need to preserve as much forward motion as possible before destabliizing the vessel of your body.

Once the recovering arm begins to pierce the water (Phase 2), body rotation then begins as the recovery arm pierces down and forward (at the 11 or 1 oclock position) accompanied by a quick forward flick of the opposoite leg (also known as the 2-beat-kick or 2BK).

At this point and only at this point, the lead arm can then gently begin an inward rotation of the shoulder accomanied by bending of the elbow so taht the forearm “flops” inward and the body skates past. This is the catch and it’s a far simpler movement than usually described. What makes it complex is the fact that it is happening in 3 dimensions and must be timed so as to not upset the fore/aft nor the rotational balance of the body when the catch takes place.

The catch and pull are the result of proper body positioning and fine attention to the movement of the lead arm, and as such, is the last phase of the stroke.  As the lead forearm “flops” to the catch position, the remainder of the pull involves pressure at the elbow, not the hand, while keeping the forearm verticall aligned with the pool bottom. All the while the new lead arm is piercing the water and the body has already rotated to it’s opposite stable edge between 40 -70 degrees.

Next time you are in the pool, try implementing the “forearm flop” on one side at a time.  Don’t worry initially about the pull itself, just focus on the timing of the flop.  Swim a length (or half a length) focusing on only one side’s timing while not concerning yourself with any other parts of your stroke.  Soon you will find that the catch becomes a much more powerful part of your stroke, leading to “free speed”.

Please let me know any comments or concerns you have about the technique I described above.  If you’ve tried it, let me know how it’s feeling!

Triathlon Run Training – How do Arms play a part in Running?

Triathlon Swimming Tips – How to Swim Straight in Open Water

How Swimming Helped me Lose Weight